I am angry. Perhaps you’re angry too? Maybe you just got off the phone with your family, maybe someone came up to you today and beat you over the head with a stick, maybe your code crashed and forgot to save your work. Believe me; I’ve been there on each of these. However, what has me angry today is something entirely different. When I’m home and spending time with my parents we eventually decide that we’re all exhausted from a long day of looking at recipes, cooking, cleaning up from cooking, or playing bananagrams. So what do we do? We watch TV.  An easy task in concept, but very difficult in practice. To assist, I have this convenient diagram: 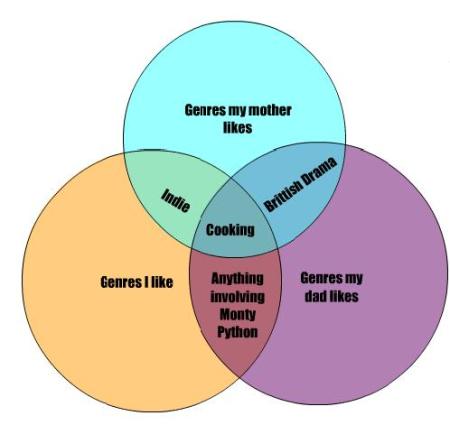 This means when the three of us are in a room together and the TV is on, it’s the Cooking Channel and the Food Network. Even better, these are the channels on which Good Eats appears! Since I spend about 40% of my TV watching hoping the next show will be Good Eats, I’m never unhappy. By the same principle, I’ll often find myself watching Iron Chef if only to hope Alton Brown will take center stage.

It was with Iron Chef that my rage began.  They were showcasing the most original uses of food science. Smokers made out of ice, class 4 lasers, food printers, it was all a food nerd could hope for. Then Wylie Dufresne breaks out an enzyme called transglutaminase and all hell breaks loose.  All this strange sounding stuff does is act as a bonding agent between proteins.  You’ve probably eaten it before, if you’ve ever had a California roll (it’s in the imitation crab meat) or ham.  Trust me when I say that while it has a scary science-ey name, it’s harmless.  Still, that doesn’t stop the commentators from mindlessly bashing molecular gastronomy for a good fifteen minutes. Nothing -not even strangers hitting me with sticks makes me as angry as people bashing food science.

Yes, there are lots of reasons to not like molecular gastronomy, and I am absolutely not supporting replacing your Thanksgiving turkey with a poultry infused foam, or replacing a good old campfire with a laser to toast marshmallows.  What I didn’t like was their argument against molecular gastronomy.  Their main argument was: Mr. Dufresne’s cooking was putting “too much science” in something so bound up in the sensory . To this I default to the I-have-no-time-for-your-foolishness emoticon, otherwise known as the  -_- .  The digestive system involves a lot of science as well, does knowing that take the soul out of eating? I can’t speak for everyone out there, but certainly not for me.

“Ok,” says my hypothetical opponent, “but you don’t think about it when you’re eating. You’re focused on the flavor and the emotion”.

“Oh really?” I say, arching an eyebrow (which I can’t actually do, but this is hypothetical argument world…so I can), “Perhaps that’s true for you, but these critics were on TV to showcase interesting food science! The target audience is watching this to see people take ingredients and make something amazing. If you don’t want the science, there is no need for you (critic and hypothetical non science-ey viewer) to be there! Especially when the entire episode is devoted to innovative cooking ideas.”

There is no cooking without chemistry. Cooking is defined as “the process of preparing food by heating it” so automatically you’re changing the food’s state, denaturing proteins, caramelizing sugars, creating new compounds, what have you. So doesn’t it make sense that those who want to make great food understand how it works on a basic level?  You cream butter and sugar in cookies because of chemistry, not because the gods of the recipe told you to.

(By this point, my hypothetical foe has been stunned by my brilliance and falls off of a cliff or something…)

I’m not saying every chef needs to be employing molecular gastronomy in their cooking, or even entirely understand the chemistry behind making food. But, all molecular gastronomists are trying to do is push the boundaries on a branch of science. How could anyone reading this (and therefore using the internet) say that such innovative thinking is something to be avoided?

Honestly, if you’ve made it this far into my rant I applaud you.  Normally my posts will be more focused on recipes than anger. Still, I have one more issue to take with this “too much science” complaint.  “Too much science” somehow implies that there is a limit on how much science one can do in a day. As if the science police will come and arrest you if you over do one day and you’ll be taken to science jail. Or worse, that if you science too hard, you’ll ruin something aesthetically pleasing. Here I become so angry I must default to the immortal words of XKCD:

So there you have it, my first post and (hopefully) one of the few non-recipe based posts I will present to you.  Thanks for reading!  I do hope you come back again and give this blog a reason for existing.